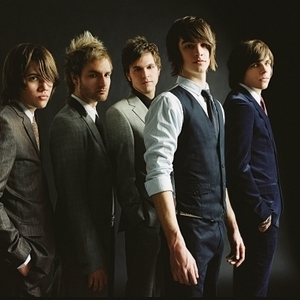 Kyle Patrick, Joey Zehr, Ben Romans, Joe Guese, and Ethan Mentzer.  Maybe you know these names, maybe you don’t, but together they were The Click Five and they were one of the main musical forces at the forefront of my teen years.  Initially, the group hit the scene in the mid 2000s with their original lead singer, Eric Dill, and grabbed a top 10 hit on Billboard’s Hot 100 chart with their very first release, “Just The Girl.”  Eventually, Eric decided to leave the band, causing the rest of the group to return to their Boston roots at the Berklee College of Music to find a replacement.

This is where Kyle Patrick, the major crush of my teen years, joins the narrative.  He met the band while he was attending Berklee and things just clicked (yes, an obvious pun but I had to) and things went from there.  When their album, Modern Minds and Pastimes, was released, I instantly fell for it hook, line, and sinker.  With upbeat bops like “Jenny” and “Flipside,” to tracks of heartache and reflection like “I’m Getting Over You,” “Long Way To Go,” and “Mary Jane,” the entire album is strewn with infectious melodies that I’m still in love with to this day.  Along with being talented musicians, they were also a charismatic group of really funny guys and I loved keeping up to date on everything they posted. And there was also something about Kyle and his smooth, silk-like voice that caught my teenage heart and just didn’t let it go.

Their last album together, TCV, is a treasure trove of addicting melodies and thought-provoking lyrics.  “Don’t Let Me Go” is a beautiful track of longing and emotional swells, while “Just Like My Heart Falls” and “Good As Gold” are some of the most melodically enthralling songs to fall for.  Unfortunately, The Click Five amicably split ways in 2013, breaking my heart and leaving me forever wishing for another album. The part of my teenage self that still resides within me will always miss them, while my adult self continues to listen to their old albums…and occasionally still swoons a little at the sound of Kyle Patrick’s voice.