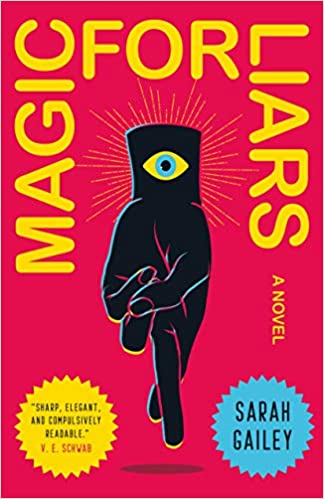 Halloween isn’t just a time for dressing up, scaring people, and eating candy. It is also a time for scary stories, or even non-scary stories filled with magic and fairy tales. If you are looking for a fantastical book with a refreshing take on magic to enjoy this spooky season, I recommend Magic For Liars by Sarah Gailey.

Magic For Liars combines the excitement and intrigue of magic with the suspense and thrill of a murder mystery. The novel follows Ivy Gamble, a private investigator, after she is hired to investigate a mysterious death at the Osthorne Academy for Young Mages, where her sister teaches magic. Authorities rule the death an accident, but as Ivy continues investigating, she begins to realize there is much more to the story.

Long-time fans and newcomers to the murder mystery genre will absolutetly love this story and its characters. After only a few chapters, I was invested in reaching the ending and resolving the countless mysteries. As for the magic, this story takes the idea of magical theory rarely explored in most books about magic and takes it farther, creating a world where magic isn’t just a supernatural power, but something studied and debated by the brightest magical minds. Gailey’s take on magic was much different than anything I have ever seen, and quite well-done, in my opinion. Next time you need a new book, check out Magic for Liars.