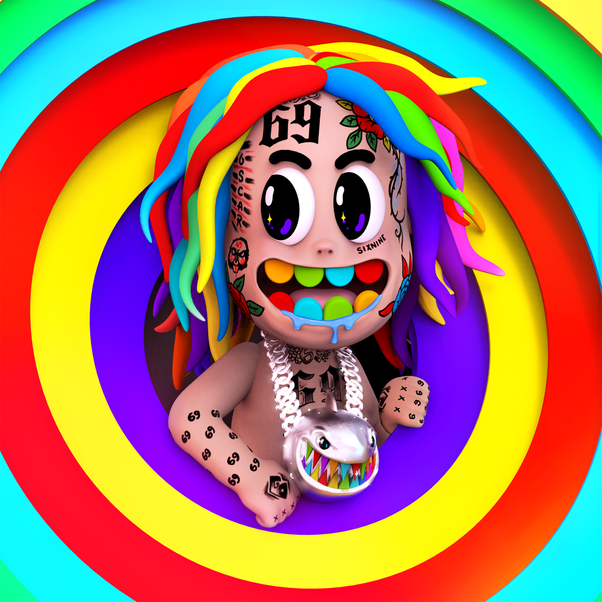 Tekashi 6ix9ine has always been seen as that annoying kid in school that never seems to run out of new things to annoy you about. That business model has proven to be quite effective, as 6ix9ine has become one of the most talked-about rappers in the world. I’d estimate every teenager who listens to hip-hop, the largest genre in the world right now, has heard of 6ix9ine, and purely in terms of exposure I’d put his name on the same level as new-school behemoths like Drake, Post Malone, and Future. Bursting out of the Soundcloud scene in 2017 with songs like “Gummo” and “Poles1469” with contemporary and later rival Trippie Redd, 6ix9ine became one of the core figures of the sound due to his over-the-top hairstyle and tattoo coverage and lyrically derivative, energy-driven hits. As the popularity of that scene died out, rap fans got to see a once-in-a-lifetime show of survival of the fittest in the music industry, with just a handful of rappers battling to see who would remain in the spotlight. Some outgrew and transcended the scene with dignity and acclaim, like 21 Savage or Lil Uzi Vert, some fell off into the pathetic depths of memehood, like Rich the Kid or Smokepurpp, and some failed the survival of the fittest test quite literally, with rappers like XXXTentacion and Lil Peep joining the ranks of Tupac and The Notorious B.I.G. as some of the most notable young deaths in hip hop.

But the majority of the rappers of the Soundcloud era are still clinging to their early success, fading out ever so slowly as they’re music becomes less fresh and their images less interesting. Rappers like Lil Yachty, Lil Pump, and Lil Xan, couldn’t ride on their image anymore, and with each new mediocre release more and more people simply stopped paying attention. And so is the case for many flash-in-the-pan artists over the past several decades.

But there’s one artist who has played the game immaculately for years. 6ix9ine, as an artist, has somehow transcended music. The natural order is that an artist who makes it based on memes or controversy are eventually tested for their music, and that’s when they either die out or rise to the occasion. But 6ix9ine found a middle ground, and somehow found enough controversy and enough troll within him to skate on music forum headlines and internet comments for an astonishing 3 years. Many found his music atrocious, many, including me, found it tolerable, even catchy and memorable at times, but 6ix9ine never let himself get to the point where he could be judged for his music. All of those teenagers who knew who 6ix9ine was never had to listen to a song to understand his presence. Everything from shootings to sex offenses involving a minor to a major gang bust couldn’t make us stop looking, and every new video or song kept us engaging with and memeing 6ix9ine.

But with his post-’rat’ releases, most recently his 2nd studio album TattleTales, everyone seems to suddenly, finally, be losing interest. After the drop and massive success of Gooba it seemed that 6ix9ine was destined to continue to skate along forever, but 6ix9ine’s flop has been historic, with his single “Trollz” breaking the record for the biggest drop on the Billboard Hot 100. TattleTales is on course to have a good first-week reception, but I think everyone is expecting a “Trollz”-level fade-out. I’d like to give some reason for this, but I have no other answer except that it appears every rap fan collectively stopped caring at the same time. What’s been happening to Lil Yachty and Lil Pump for years has happened to 6ix9ine over the course of a few weeks.

And with that I would urge you to appreciate 6ix9ine for what he is: the upper maximum of what music fans will take. It should never be forgotten how a man so obviously detestable and so undeserving of respect managed to top charts and consistently spark conversation over 3 years. The lesson we should learn from 6ix9ine is to not entertain people like him for very long.