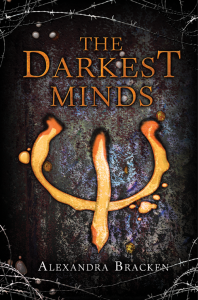 For all you young adult readers looking for a new series to try, I recommend The Darkest Minds by Alexandra Bracken. You may recognize the name from the movie adaptation released in 2018, and while I have not had the chance to watch it, I have read all three books and I absolutely loved them. Fans of Veronica Roth’s Divergent series will especially like this one, as it focuses on teenagers forced to live separate lives and eventually dismantle a nefarious government. Instead of values and personality traits, the children in The Darkest Minds are separated based on harrowing powers they cannot control.

The series follows sixteen-year-old Ruby as she uncovers truths and attempts to escape the corrupt adults that have controlled her for years, eventually joining up with other powered teenagers like herself and forming a new family, all the while keeping her own dark secrets. With multiple books full of love, family, friendship, sacrifice, and plot twists, Bracken’s series is perfect for any young adult reader. The intricate relationships, backstories, and motivations she creates for her characters are enthralling, and she always finds a way to bring in the unexpected. Next time you are looking for a good fantasy series, pick up The Darkest Minds.