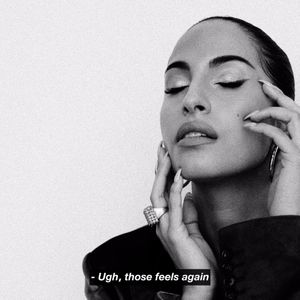 My current music obsession often reflects the weather and seasons. Songs filled with up-beat major chords in the summer often transition into slow and emotional instrumentals in the fall. These winter months have been dedicated to listening to the latest album by Snoh Aalegra titled, – Ugh, those feels again. This album follows Aalegra’s raw thoughts and emotions as she re-enters the dating life after ending a long term relationship.

Aalegra’s lyrical candor early on in the album allows the listener to feel a personal connection, as if they are reading her diary. Beginning with ‘I Want You Around’ and ‘Situationship’, these songs outline how she finds herself developing feelings for someone, but doesn’t necessarily like it because she’s scared of what might come. The next few songs shift in theme. In ‘Whoa’ and ‘Find Someone Like You’, Aalegra sings her love letters to a new found love pairing with whimsical notes alluding to a dream or fantasy. Although these songs still contend with the minor chord base of the album, she pairs the violin and spiractic piano that match the excitement in the lyrics.

The next half of the album starting from the song ‘Love Like That’, is a self reflection of the problems that begin to develop in Snoh’s romantic relationship. Her feelings of anger and hurt are found on ‘Charleville 9200, Pt. II’ and ‘Nothing to Me’. The choppy beats paired with the minor chords create a sense of discomfort. Snoh’s feelings of true sadness and sense of detachment from reality, that so often come with a heartbreak, are personified in the songs ‘Be Careful’, and ‘You’. These slow, melodic pieces evoke the deep emptiness in longing for the someone who was once the closest person in her life. Eventually, in songs like ‘Njoy’, she begins to find inner peace and closure. With time she found the ability to reflect on her relationship with an untainted perspective. Aalegra realizes her worth and no longer has an inner voice forcing her to feel regret over the events that transpired, in what she thought would last forever. The song ‘I Didn’t Mean to Fall in Love’, is one of my favorites. It’s beautiful harmonic backing puts you in a good mood with the perfect arrangement. Almost like a song when the credits are rolling in a movie, it does the same as it wraps up this album.

It is comforting and easy to connect with this album because it was produced without heavy autotune or forced perfect pitch. The raw vocals are utilized to match the theme of vulnerability that is carried out through the entire album. Aalegra’s vocal range is incredible and the authenticity is inviting. Each emotion and development in the storyline can be felt by the listener, confirming that she truly felt both the pain and joy sung in the creation of this collection. Overall, I highly recommend giving it a listen to, because whether it’s the beautifully layered harmonies, or a deep love story there is at least one track on this album that any person can relate to and appreciate.