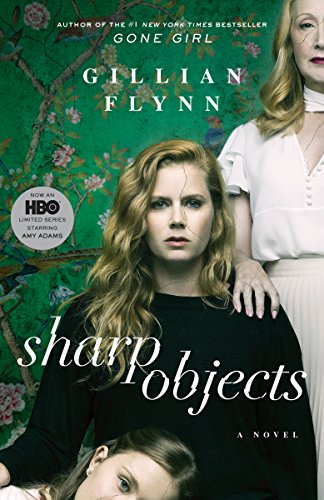 Author Gillian Flynn is likely best-known for her 2014 psychological thriller, Gone Girl. Flynn’s ability to disguise her characters’ true intentions behind unreliable narration and false personas is part of what made Gone Girl so compelling, yet this element of Flynn’s storytelling can also be found in her earlier work, including her debut novel: Sharp Objects. Published in 2006, Sharp Objects has all the character complexity and mystery of her later work, but ventures even further into exploring the gruesome acts some people are capable of.

Sharp Objects begins in a noticeably darker setting than Gone Girl: rather than being thrown into the middle of a marital dispute, readers are introduced to Camille Preaker, a journalist returning to her hometown to report on the abduction and murder of two young girls. Her investigation is complicated by her mother and thirteen year-old stepsister Ama, both of whom seem to know more than they are willing to say. Yet the deeper Camille digs, the more questions she finds: her overbearing mother is status obsessed and vain, but how far would she go to keep her image intact? Ama is beloved by the town and her friends, but does her innocent facade hide darker intentions? At times, Camille doubts even her own sanity as some of the tragic events in her own childhood begin to repeat themselves in the present. Flynn’s writing will once again have her audience second guessing themselves as they try to decipher who is trying to escape past tragedies, and who is covering their tracks. Sharp Objects is a must-read for any reader who enjoyed Flynn’s more popular work, but is looking for more of a thriller/horror blend.