When Is The Costume A Costume No More?

An interview with freelance artist and costume designer Harry Pearce. 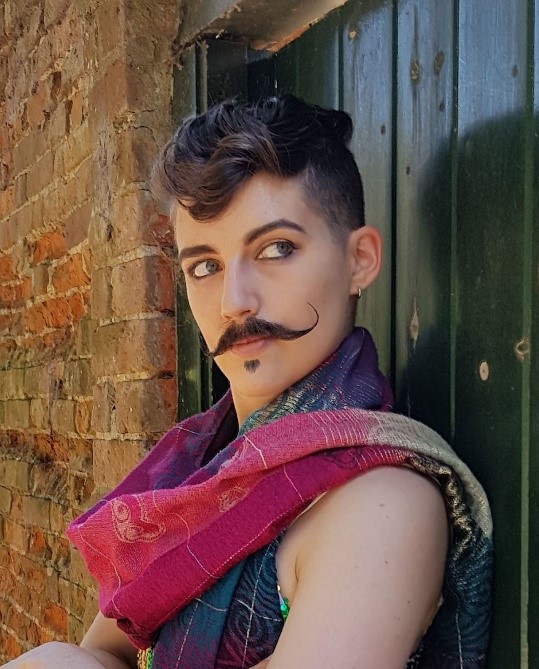 I’ve been friends with Harry for most of my life. We’ve known each other since elementary school, and even after he moved to England for his college degree we’ve remained in close contact over Skype. So when I called him up for an interview about his foray into costume design and cosplay, the sight that greeted me when the call connected wasn’t that of my friend, but of a fabulously glittery elf with platinum blond hair, purple eyeshadow and matching blush, blue lipstick, and a towering burgundy witch’s hat to bring the look together. Harry was showing me his makeup test for his latest cosplay, the character Taako from hit Dungeons and Dragons podcast The Adventure Zone.

Taako is a dear character to many TAZ listeners because of who he is – a canonically genderfluid, unapologetically gay character who couldn’t care less what others thought of his appearance as long as they knew his fashion choices were on point. That Harry was taking on this character spoke volumes for his own journey.

My desire to interview Harry about cosplay stemmed from my curiosity at not just the craft behind making customized costumes, props, and wigs, but also the incredibly freeing idea that when you put on one mask, you’re finally able to shed another. Back in high school, Harry had already been making his own Halloween costumes. It was also around that time when conventions and cosplay started getting really popular and weren’t seen as something to be laughed at. The origins of the term ‘cosplay’ can be traced back most notably to Japan, and was for a very long time considered an eclectic and sometimes cringe-worthy pastime; but over the years and thanks to large conventions where fans continued to showcase incredible homemade costumes, it has become so popular that artists can consider themselves professionals. A rich subculture has sprung up around cosplaying and costuming, with artists making videos, tutorials, and even full commission-based businesses on their craft. 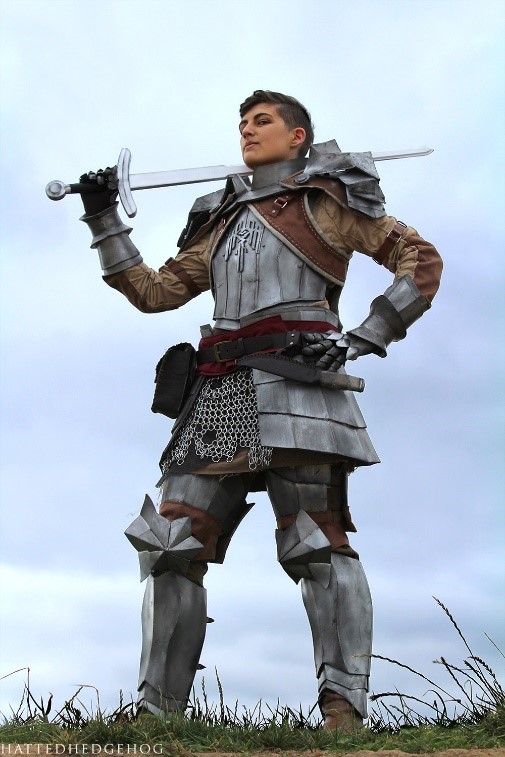 Shortly after moving to Norwich, England, Harry began posting pictures of his own processes on his Tumblr and Twitter pages in between his more typical digital and traditional paintings. I was fascinated and blown away and watched as he improved over the years. It was more than just putting on a wig, makeup, and prosthetics. It was more than dresses or armor or haircuts.

Harry had found himself, by not having to be himself.

“I never considered before I started wearing my costumes that your body can be the art form – that you can be the art,” he told me. It’s a way of exploring methods of identity expression that might not normally happen, like the simple act of donning fake facial hair for a magnificent mustache. “The first time I put on the facial hair for my Hobbit dwarf costume, it made me feel that the things I was putting on my face were worthy. I didn’t have to hide the part of myself that wanted that facial hair.”

Harry considers himself nonbinary – he doesn’t affirm to female or male gender identities and requested the use of he/him pronouns for this interview. His journey has been long, but it is one that many others have gone through. He traces that spark back to the time he cosplayed as a dwarf from The Hobbit movies back in 2016 and more recently completed a fully custom outfit for the transgender character Krem from BioWare’s Dragon Age: Inquisition.

Krem was, perhaps, Harry’s most intricate costume yet – from making the armor one chainmail ring at a time to cutting his hair shorter than it’s ever been, it was an undertaking he was both nervous and excited about.

“I was worried that by cutting my hair and presenting visually as male, it would make my identity obvious,” he told me. “My hair had always been my defining feature, for years, when I was still presenting as female and figuring myself out. But when I decided to cosplay Krem, a character I related to on a deeply personal level, I knew that I would never have a better excuse.”

“And when you debuted your cosplay for the first time, how did it feel to wear it? What was the reception like, both in person and over social media?” I asked. I remember when I first saw the photos on his Twitter feed, having to do a double-take to ensure it was actually him and not a screenshot from the game.

“I was overcome, to be honest. To have a transgender character so openly acknowledged and accepted, and to have people recognize him and come up to me saying so, it was incredible.”

In fact, the response was so incredible that both Krem’s voice actor and one of the Dragon Age writers from BioWare responded to his post in praise of the costume. Having worn it to several conventions now, Harry was noticed and approached by The Cosplay Journal, an online publication dedicated to highlighting the diversity of cosplayers in race, gender identity, and more for a photoshoot and interview.

“What was it like to wear your costume in public and have people see you, address you as male? Or even walking around without wearing the costume but with the haircut and being addressed as male?”

“In a word? Freeing,” he said. “Being able to express my gender, to explore it in a way that I wouldn’t be judged or ridiculed, it was a significant factor in my growth as a person. I gained so much confidence in myself in being able to talk to people without worrying about what they might think. The armor was both physical and metaphorical.”

He smiled then, the glittery purple blush from his makeup catching the light even over the video call. The hat wobbled precariously on his head as he adjusted the wig beneath it. “The next cosplay I’m working on is another character from the Dragon Age world. She’s also transgender, and best friends with an openly gay character.”

“What do you think it’ll be like, going back to a more feminine appearance with this costume?” The last time he’d worn a feminine costume was his cosplay of the dwarf Dis, the mother of The Hobbit characters Fili and Kili. For that costume, he’d worn a dress and still had long hair. “How do you think it would feel if you were called ‘she’ again?”

“It’s intimidating, but I don’t think it’ll bother me that much now. Sometimes I do miss wearing traditionally feminine things, but when I cosplayed another Dragon Age character, Dorian Pavus, who is male but wears the most incredible jewelry and immaculate eyeliner, it felt good. And right now,” he gestured to his Taako outfit, “it feels wonderful. Characters like Taako, like Krem, like Dorian, they all blur the lines between gender conformity. There’s a long way to go before the world is ready to dismantle those boundaries between masculinity and femininity, but I think the rise of and acceptance of such blurring when it comes to cosplay is a step in the right direction.”