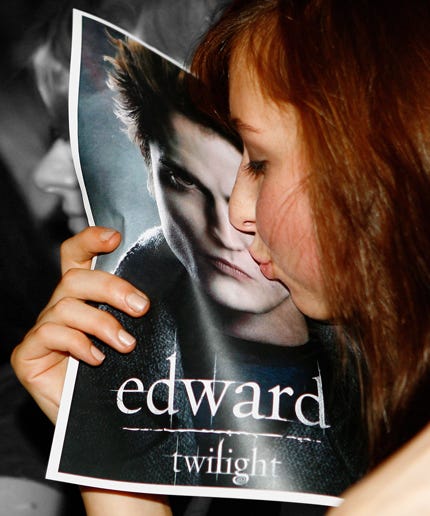 It may be difficult to imagine now, but exactly 12 years and seven days ago in August of 2008, millions of people (approximately 3.7 million to be exact) were up late and eagerly counting down the seconds until midnight. Why? Because at 12:00 AM author Stephanie Meyer would release the fourth and final book in the Twilight series: Breaking Dawn.

The Twilight books have recently re-entered public consciousness as the subject of multiple satirical memes, Tweets, and videos made to highlight the absurdity of some of the series’ more bizarre aspects. Meyer’s decision to include disturbing and occasionally abusive practices under the guise of romantic gestures, a character who formerly served as a confederate soldier, and a plot point hinging on an adult man’s predestination to marry a child has many former Twihards wondering what could have possibly drawn them to the books in the first place.

It is not at all uncommon for the examination of former adolescent passions to result in feelings of embarrassment. Most people can think of at least one thing they were obsessed with growing up that now only carries nostalgic appeal—and for many the subject of interest was a literary universe. If you were an avid reader as a kid, books like Harry Potter, Percy Jackson, The Hunger Games (and yes, Twilight), may have at one point felt like the most important thing in the world; stories you would never not be completely engulfed in.

Of course, with education and experience we begin to see the problems with these stories that we may not have noticed before—those that are usually a result of the author’s own biases and prejudices. However, instead of distancing ourselves from these books’ impact by labeling our adolescent interests as “stupid” or “embarassing,” we can perhaps use them more as a means of measurement. Being able to change how you engage with the stories you used to love is a positive thing, because it means your capacity for empathy and critical thinking has grown. Simply put, your love of Twilight can be a mile marker along your journey as a reader rather than a humiliating wrong turn.